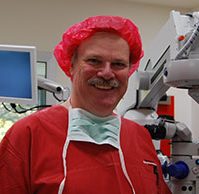 Dr Workman completed his medical degree at the University of Melbourne and then completed his medical specialist training in ophthalmology at the Royal Victorian Eye & Ear Hospital (RVEEH). He worked as a Retinal Fellow before establishing the North Balwyn Eye Clinic & Laser Centre in 1989 where he was in private practice.

He is also a Designated Aviation Ophthalmologist for the Civil Aviation Safety Authority and is authorised to certify civil pilots, aircrew and air traffic controllers for aviation purposes. He has a post graduate qualification in Aviation Medicine. He has his private pilot's licence. He was in the RAAF Specialist Reserve for six years and is now in the Stand-by Reserve.

Dr Workman is also a registered surgeon with the Department of Veterans Affairs. He is a Fellow of the British specialist College.

He has a special interest in laser and conventional cataract surgery.